Several months ago, I found the most amazing website. It became a regular break from the from the pressures of everyday life. It was dceaglecam.org. Via webcams the site featured a wild eagle family nesting in a tall 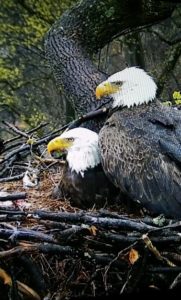 Tulip Poplar tree at the National Arboretum in Washington. This ‘first family’ of bald eagles, a mated pair named “Mr. President” and “The First Lady” were mesmerizing to watch as they prepared their nest, laid their eggs, fed their hatchlings and raised  them until the eaglets grew strong and healthy. Before our eyes, in living color, bold and beautiful Bald Eagles flew to and from their nest, gently hovering over their eaglets, keeping them warm, safe and well fed. Their teamwork was flawless as they flew in with fresh fish (mostly the male), feed their young (both parents), keep the nest clean and free of debris (mostly the female) and carried in fresh branches (he brings she arranges!).

Along with thousands of chatters across the world, I logged on to the chatrolls as expert moderators discussed and explained eagle behavior. I realized that many others were as emotionally involved, fascinated and invested in this nest of Bald Eagles as I was. This year the pair raised two eaglets who were named Freedom and Liberty. The eggs were laid in February 2016 and the eaglets fledged in June.

I watched as they grew from tiny, wobbly hatchlings to large fledglings standing as tall as their parents. It was my great good fortune to witness a miracle such as this. I hope that the pair will return again to this nesting site in January so write it on your calendars, watch for my postings and get ready to plug in your laptops, turn on your smartphones and log on to watch this miracle of nature with me. I can assure you I’ll be watching!